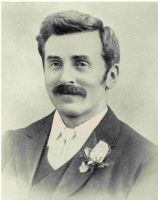 Wednesday 4th February 2009 marked the 100th anniversary of the death of Walter Slaughter, the leading light behind the formation of Cowley Road Methodist Church.

In 1871, Walter was only a young man when he saw some boys at play outside his house in Cross Street. He asked if they would join him in forming a Sunday School. From small beginnings (just six children), the Sunday School become the largest in Oxford.

In the Sunday School's early days, they met in a cottage in Chapel Street, sharing the building with a donkey. The donkey became a nuisance owing to his braying during the services!

In 1883, Mr Slaughter founded a new chapel in Tyndale Road (now the Christadelphian Hall). The Sunday School continued to thrive. Its outings were on a huge scale, with a procession of up to 500 children marching behind a band to the special train hired for the day for the trip to Woodstock.

In 1904, a new church opened on the corner of Jeune Street and Cowley Road. Now known as Cowley Road Methodist Church, it would never have been founded without Mr Slaughter's leadership.

Walter Slaughter died aged just 55, when he was thinking of retiring from the grocery business he ran in St Clements, to concentrate on service to the church and the people of East Oxford. At his funeral service, the church was "filled to its utmost capacity". A memorial tablet, still on display in the church today, says "He was a generous supporter of all good work, a kind and sympathetic friend to the poor and a consistent follower and servant of his divine master".